What the Memphis Grizzlies Can Learn from A Few Kids 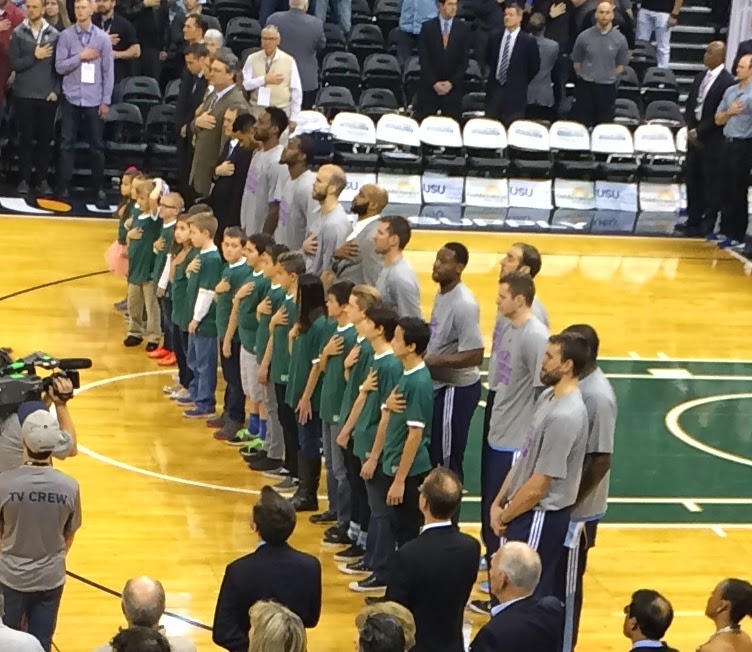 Two weeks ago, my parents took my 11 year old son and me to a Utah Jazz game. It had been years since I had watched the NBA, and boy had things changed. The beginning was spectacular with fire, motorcycles, cheerleaders and a crazy mascot. The players were pumped and the crowd was ready. I was impressed.

Until the national anthem.

The woman singing was pitch perfect. The National Guard was serious, strong and reverent. The children on the court were in 2 lines, standing still as could be with their hands over their hearts. The crowd was mostly quiet and attentive. My eyes drifted from the singer to the players, and I was shocked.

The Memphis Grizzlies, currently #2 in the Western Conference, stood haphazardly. One continued his stretches and his warm ups, bouncing up and down. A few stood chatting with each other and laughing, and only TWO had their hands over their hearts. I watched a bit longer, hoping that perhaps they hadn’t realized what was going on yet. I wanted their coach to look down the line, and like an embarrassed mother, snap his fingers and motion to where their hands should be. But he didn’t. And they didn’t. It continued for the entire “Star Spangled Banner.”

Afterward, my son asked me why the soldiers’ presenting the flag were so serious. My answer to him was because that flag and that anthem mean something to them. They know men and women who have died defending the freedom it represents. They have personally sacrificed months and years of their time, leaving the people they love to fight for our country and what it stands for. Some of them have mental, physical and emotional injuries that might never be healed because they volunteered to protect us, so of course they take it seriously…that flag represents goodness, honor, bravery and above all else, freedom and sacrifice.

So, if the opposite is true, then to those athletes perhaps that flag and that anthem mean nothing. If it did, they would certainly be able to pause for 3 minutes to honor those who fight while they play. They might take a minute and reflect on how living in a free country gave them public education, parks with basketball hoops, recreational leagues, volunteer coaches, high school sports, college scholarships, and a capitalist system that allows excellence in anything to be celebrated and monetized. Because of our freedom, they get to make more playing basketball for a week than many soldiers will make fighting in the Middle East for an entire year.

I hope at our next NBA game, my son will whisper, “Mom, why are the athletes all so serious during the national anthem? and I can say, “Because, their freedom means everything to them.”

**After this experience, I wanted to make sure my own children understood how to show respect during the national anthem at sporting events or any event. We had a nice dinner table discussion that was enlightening to us all and reminded us of the sacrifice so many make on our behalf. We are so incredibly grateful! If you have ever wondered what you are supposed to do during the National Anthem (hint: hands behind your back is not correct), here is a great link: National Anthem Etiquette .