The Ugliest Moment I Have Seen in Youth Sports 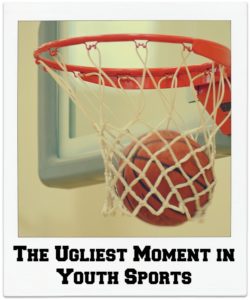 I love youth sports. I have four boys and they play them all the time. For the most part, win or lose, sports are something we enjoy and grow from. However, every once in a while, things get ugly, and it has never been uglier than one winter night on the basketball court.

My son started competition basketball pretty late in the game, as an eighth grader. He was on a team full of beginners and they had weathered a tough, winless season, each week playing teams significantly more skilled and more experienced. Each final score accentuated the difficult season with most games ending in an absolute slaughter.

The silver lining was a phenomenal coach who consistently taught them fundamentals, patiently encouraging and coaching them through each tough spot. He knew better than to expect a win, but he did expect improvement, and the boys delivered each week. After all, every athlete has to start somewhere.

Then came the dreaded game against, arguably, the best team in the league. As the opposing team walked onto the court, jaws dropped. Their shortest player was the same size as our tallest, and their average height had us by about 8 inches. Even as fans we understood the ominous David and Goliath moment as our kids snuck glances at the giants warming up across the court. Intimidation had set in, and by half time they had outscored us by 30 points.

At the beginning of the third quarter, the boys on the other side were obviously not taking things too seriously anymore, laughing when they shot an airball, joking around and giggling with their coaches on the bench. It was clear how they felt about playing a team like ours. To their credit, the boys were cool on the court, high-fiving our players when they made a shot and smiling and conversing with them on the foul line. Great athletes and nice kids, most likely enjoying the chance to take sports a little less seriously for a moment.

And then, at the beginning of the fourth quarter, the coach waved a little brother over to the bench who looked about 5 or 6 years younger than our boys. The coach gave him a jersey and told him to suit up. The eager boy excitedly put on the oversized top and the bench erupted with hoots and hollers while the game continued, uninterrupted on the court. The younger brother checked in with the score table amid raucous laughter from the other side. Then, in an instant, everyone painfully realized what was going on.

Our boys’ faces fell and their bodies deflated. All of a sudden they were aware that they were the object of all the mockery. The coaches and fathers from a far superior team found it necessary to put on a show at the expense of impressionable teens; to kick them when they were already down. For them, beating a team by 50 points wasn’t enough, they wanted to lord their superiority over the underdog until they had emotionally decimated those brand new basketball players.

Our coach stopped the game and discussed the move with the officials and scorekeepers, who should have known better. A few parents on our side shouted their opposition to what was going on and walked out. The mood in the gym changed from light-hearted on one side and embarrassed on the other to tense and uncomfortable for everyone as the younger brother was told to sit back down. No good person could have watched the scenario without feeling like something terribly wrong had just happened.

Our team signed up for a competitive basketball league and was prepared to be beaten by as many points as the other team could score, that is competition sports; but, we were unprepared for the classless display of elementary behavior put on by men who should have known better and been better.

However, even after all that, there is still a moment from that night that makes me smile. Through that thick air, our boys finished out the last six painful minutes. They hustled, kept their heads up, and completed the game the way they started, giving it everything they had.

This is why we play sports, because of moments like these. The winning is fun, the activity is necessary and the friendships and talents are irreplaceable, but, in the end, it is about so much more.

It is about winning and losing with grace; about working hard, not being rewarded, and working hard anyway; about trying and failing; about going up against impossible odds; about banding together for something bigger than the individual; about getting back up when everything says you are defeated; about finishing what you started. Sports, when done well, can shape young people into a better version of themselves, and that night I was never more proud to be part of the losing team.

The opposing coaches certainly knew how to teach basketball, but they fell seriously short when it came to teaching character. And when all is said and done, isn’t that what youth sports is really all about?