I have been thinking a lot about stones lately.

This same message occurs in the New Testament when Jesus halted the condemnation of the woman taken in adultery by saying, “He that is without sin among you, let him first cast a stone at her.” He stopped the stones.

Bryan Stevenson, in the powerful book “Just Mercy” asks his readers to not just refrain from throwing stones but to become stone catchers, people who will stand up for those under fire and protect those who are too beaten down to defend themselves.

It made me think. I wondered what life might be like if there were more stone catchers than stone throwers.

I encountered a stone catcher years ago in the aisles of Target. I was trying to reason with my unreasonable 2-year-old while I held a screaming baby. Just before I lost it all, a woman said to me, “I love how you speak so kindly to your children even when they are giving you a hard time. You are a wonderful mother.” In that moment, I was saved by a stone catcher. I am not the only one.

Jessica had just delivered her sixth baby and was barely staying afloat. At the time, her third-grader was diagnosed with ADD, was struggling in school and Jessica didn’t have the bandwidth to help him. His teacher rescued them both. She took that little boy under her wing without complaint, loved him, taught him and ensured his academic success, never once questioning Jessica’s lack of involvement or choice to have another baby when her plate seemed so full. She carried them both through that year, protected them and loved them when it would have been so easy to do the opposite.

MJ was going through a divorce she never expected. She braced herself for whispers, judgments and isolation, but instead found hope and strength in her family and friends. They were her stone catchers. They offered couches to sleep on so she didn’t have to spend the nights alone, and listening ears when she couldn’t take the heartbreak. One day, MJ’s daughter had a friend over to play, and that afternoon MJ was confronted with devastating news. The kids were outside, so she sobbed to herself, trying her best to hide her pain. That night, on her doorstep, was a pizza and a note from the mom of the little girl who had been over to play and heard MJ crying through the door. In that moment, MJ’s heart started to heal and her guilt was swept away for a moment by the food and love offered by that kind woman,

A few years ago, my grandfather asked my cousin to help him put up a welcome home sign on the gate that marks the entrance to their polished, private community. As they were tying it to the fence, my cousin asked where the man was returning from, assuming it would be from military service, college or a mission. He was startled at the answer: “He is coming home from prison and I want him to know that we are happy he is back with us.”

That day, my grandfather stood proudly and caught this man’s stones so he could walk back into life knowing that someone was on his side, someone was rooting for him, someone was glad he was home. 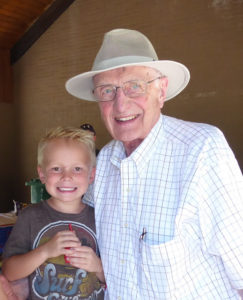 So, can we be stone catchers? Can we smile at that teenager with wild friends and loud music and get to know him instead of rolling our eyes? Can we talk less about the school yard bully and find ways to love him instead? Can we rescue the mother who is barely holding on? Can we hold our words of contempt on the internet and seek to understand first, asking questions instead of hurling insults?

Can you imagine a world full of stone catchers? A place where the benefit of the doubt is given, where judgment is held, where forgiveness is shown, and where we walk in one another’s shoes more often than our own. I’ve seen glimpses of this kind of world. I have been loved by people who see me instead of my faults; who see divine potential in my misbehaving children; who love unconditionally. I want to join these stone catchers as they change our world, one stone at a time.