100 Great, Current Reads for Boys of All Ages! 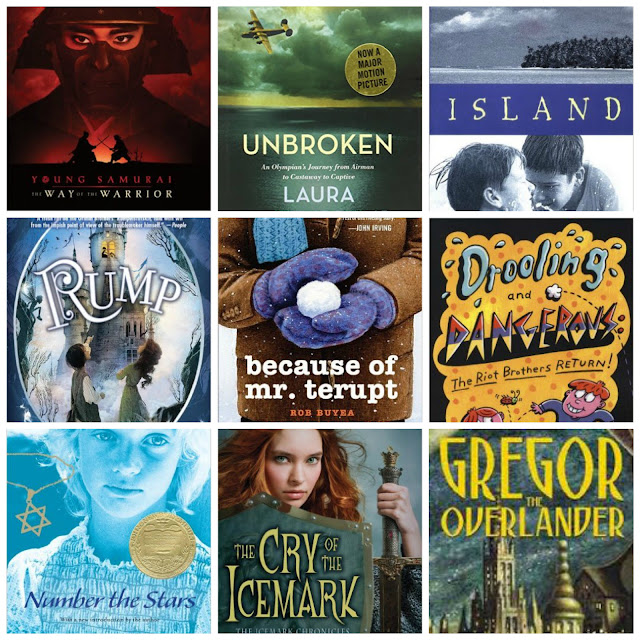 My boys love to read, but it is difficult, as a woman to find books that especially interest boys. We have done lots of trial and error, so I wanted to share some of the books that my boys have loved. The list starts with a few of our most current favorites with summaries and descriptions, then the list goes from early readers (Kindergarten), all the way up to teen fiction. All of the books on this list have been read and recommended by boys of all ages with varied interest and reading levels. It includes both fiction and non-fiction, and the 100 titles come from the book listed plus all titles in the series. Hope you find a new favorite or two!There are two items next to the book listed. The first is interest level…this is IN GENERAL the youngest someone might enjoy the book,. That being said, my boys certainly have been able to enjoy many books listed over their interest level and plenty of books under their interest level too. It is a great guide though, especially if you have a reader that is advanced or behind for his grade level. (Looking for tips to keep your kids reading? Click HERE!)The second item next to the book is the reading level organized by the guided reading letter A-Z. My boys also enjoy books above and below their reading level, depending on the subject, so don’t rule something out if they really want to read it. Of course kids read at all different levels regardless of age or grade, but if you are unsure of the level they are at, click here for a super handy chart with all the measurement equivalents or check the short description below:To summarize for an average reader’s ability: Kindergarten (A-C), Grade 1 (C-I), Grade 2 (J-M), Grade 3 (M-P), Grade 4 (Q-S), Grade 5 (T-V), Grade 6 (W-Y), Grade 7-8 (Z).

Summary: Shipwrecked on the shore of Japan, twelve-year-old Jack Fletcher is wounded and alone. His father and the entire crew have been slaughtered by ninja pirates. Jack’s last remaining possession is his father’s rudder, an invaluable book of maps and notes about the world’s uncharted oceans. Masamoto-sama, one of Japan’s greatest samurai, rescues Jack, adopts him, and sends him to samurai school, where Jack will be trained in the Way of the Warrior. Will it be enough to help Jack defeat Dragon Eye, the ruthless ninja who is intent on stealing the rudder at any cost?
The Alchemyst (Secrets of the Immortal Nicholas Flamel): Another series that has my boys holed up under the covers and finishing every last word. Recommended ages 12 and up.

Summary: Nicholas Flamel was born in Paris on 28 September 1330. Nearly seven hundred years later, he is acknowledged as the greatest Alchemyst of his day. It is said that he discovered the secret of eternal life. The records show that he died in 1418. But his tomb is empty and Nicholas Flamel lives. The secret of eternal life is hidden within the book he protects – the Book of Abraham the Mage. It’s the most powerful book that has ever existed. In the wrong hands, it will destroy the world. And that’s exactly what Dr. John Dee plans to do when he steals it. Humankind won’t know what’s happening until it’s too late. And if the prophecy is right, Sophie and Josh Newman are the only ones with the power to save the world as we know it. Sometimes legends are true. And Sophie and Josh Newman are about to find themselves in the middle of the greatest legend of all time.

Summary: Ivan is an easygoing gorilla. Living at the Exit 8 Big Top Mall and Video Arcade, he has grown accustomed to humans watching him through the glass walls of his domain. He rarely misses his life in the jungle. In fact, he hardly ever thinks about it at all. Instead, Ivan thinks about TV shows he’s seen and about his friends Stella, an elderly elephant, and Bob, a stray dog. But mostly Ivan thinks about art and how to capture the taste of a mango or the sound of leaves with color and a well-placed line. Then he meets Ruby, a baby elephant taken from her family, and she makes Ivan see their home—and his own art—through new eyes. When Ruby arrives, change comes with her, and it’s up to Ivan to make it a change for the better. Katherine Applegate blends humor and poignancy to create Ivan’s unforgettable first-person narration in a story of friendship, art, and hope.

Summary: In a magic kingdom where your name is your destiny, 12-year-old Rump is the butt of everyone’s joke. But when he finds an old spinning wheel, his luck seems to change. Rump discovers he has a gift for spinning straw into gold. His best friend, Red Riding Hood, warns him that magic is dangerous, and she’s right. With each thread he spins, he weaves himself deeper into a curse. To break the spell, Rump must go on a perilous quest, fighting off pixies, trolls, poison apples, and a wickedly foolish queen. The odds are against him, but with courage and friendship—and a cheeky sense of humor—he just might triumph in the end.

Because of Mr. Terupt: Heart-warming and thought provoking this is a story about a 5th grade classroom that learns the meaning of love, friendship and forgiveness. We love it as a read aloud because there are some mature themes and great opportunities to talk. If not reading it aloud, best for kids 12 and up.
Unbroken (The Young Adult Adaptation): This book is just as powerful for teens as it is for adults. Such an incredible story of determination, love, and redemption told so beautifully. Be sure your son reads to at least page 60, once they do, they won’t be able to put it down. Best for ages 12 and up.
Elephant and Piggy  INTEREST LEVEL: Pre-Kindergarten, READING LEVEL: Pre-K, Kindergarten (series)

The Indian in the Cupboard Grade 4-7, level R (series)