Bookworm Wednesday: The Power of One

I’ve been recommending some fun, easier reads lately, but if you are looking for a great, deep novel, pick up The Power of One. 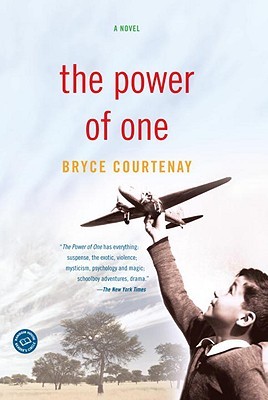 Honestly, one of the best books I’ve ever read. There is a reason it’s called “The classic novel of South Africa.” It’s inspiring and makes you feel you can do anything and I LOVED the main character so much. At the same time, it’s an intricate, well crafted, dedicated story. As with most classics, it’s not an “easy” read. In fact, it took me about 150 pages to really be hooked, but it was more than worth it. Just a warning, there is some hard stuff that happens to this little boy, so if you are a sensitive reader, it might be too much for you (but it’s oh so important) and there is some language throughout the book, but nothing gratuitous. If you read it, there is some history in the back I wish I would have read first and a glossary I wish I would have known about. If you have a book club that doesn’t mind a heavy read, this is a GREAT one. If you have read it, I would love to hear your thoughts.

Goodreads.com summary: Set in a world torn apart, where man enslaves his fellow man and freedom remains elusive, The Power of One is the moving story of one young man’s search for the love that binds friends, the passion that binds lovers, and the realization that it takes only one to change the world. A weak and friendless boy growing up in South Africa during World War II, Peekay turns to two older men, one black and one white, to show him how to find the courage to dream, to succeed, to triumph over a world when all seems lost, and to inspire him to summon up the most irresistible force of all: the Power of One