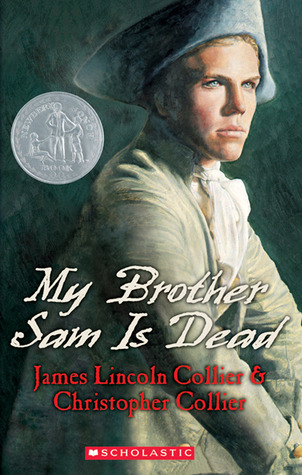 This Bookworm Wednesday is written by Sariah Sharp, a great friend and an avid reader. You can find her writing on her blog, Chocolate Phoenix.

My Brother Same Is Dead is a fantastically written piece of historical fiction, geared toward young adult readers but equally as satisfying for adults. It won a well-deserved Newberry Award and is required reading in many classrooms.

The story is set during the American Revolution from a realistic, refreshing point of view. The characters are Loyalists, but the oldest son, Sam, joins the Continental Army. You get to see the horrific deeds of both the British and the Continental armies with a strong tie to factual events and people. This book is full of real history weaved together with characters you can relate to and grow to love. There is some offensive language and violence (a bit surprising for the age this book is geared for), but both the language and violence keep it authentic.

This is a great book for parents to read alongside their children and discuss the reality of war, loyalty and love.

Goodreads.com summary:
All his life, Tim Meeker has looked up to his brother Sam. Sam’s smart and brave — and is now a part of the American Revolution. Not everyone in town wants to be a part of the rebellion. Most are supporters of the British — including Tim and Sam’s father.With the war soon raging, Tim know he’ll have to make a choice — between the Revolutionaries and the Redcoats . . . and between his brother and his father.