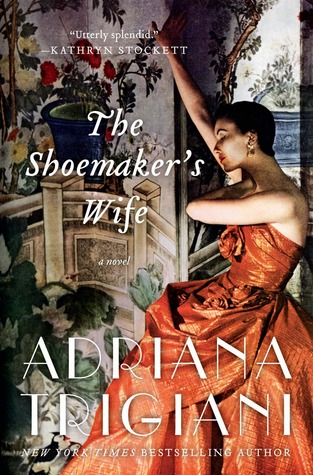 I loved The Shoemaker’s Wife! It came to me at just the right time and was the exact book I was craving after some pretty deep reads. I have always enjoyed Trigiani’s writing and I think this one was her very best. The story was a star-crossed romance, but the focus of the book was on so much more…abandonment, love, friendship, religion, devotion, integrity, risk, work, family and true happiness. The characters were likable but believable and by the end of the story I was rooting for them all. I stayed up way too late finishing it which is always a good sign. And a big bonus, it was super clean and easy to read. It won’t change your life, but highly recommended if you are just looking for a well-written book to enjoy.

Goodreads.com summary: The majestic and haunting beauty of the Italian Alps is the setting of the first meeting of Enza, a practical beauty, and Ciro, a strapping mountain boy, who meet as teenagers, despite growing up in villages just a few miles apart. At the turn of the last century, when Ciro catches the local priest in a scandal, he is banished from his village and sent to hide in America as an apprentice to a shoemaker in Little Italy. Without explanation, he leaves a bereft Enza behind. Soon, Enza’s family faces disaster and she, too, is forced to go to America with her father to secure their future.
Unbeknownst to one another, they both build fledgling lives in America, Ciro masters shoemaking and Enza takes a factory job in Hoboken until fate intervenes and reunites them. But it is too late: Ciro has volunteered to serve in World War I and Enza, determined to forge a life without him, begins her impressive career as a seamstress at the Metropolitan Opera House that will sweep her into the glamorous salons of Manhattan and into the life of the international singing sensation, Enrico Caruso. From the stately mansions of Carnegie Hill, to the cobblestone streets of Little Italy, over the perilous cliffs of northern Italy, to the white-capped lakes of northern Minnesota, these star-crossed lovers meet and separate, until, finally, the power of their love changes both of their lives forever. Lush and evocative, told in tantalizing detail and enriched with lovable, unforgettable characters, The Shoemaker’s Wife is a portrait of the times, the places and the people who defined the immigrant experience, claiming their portion of the American dream with ambition and resolve, cutting it to fit their needs like the finest Italian silk.This riveting historical epic of love and family, war and loss, risk and destiny is the novel Adriana Trigiani was born to write, one inspired by her own family history and the love of tradition that has propelled her body of bestselling novels to international acclaim. Like Lucia, Lucia, The Shoemaker’s Wife defines an era with clarity and splendor, with operatic scope and a vivid cast of characters who will live on in the imaginations of readers for years to come.

Posted in Books and School, For Me
Show Hide 0 comments
« Good Shops: Play it Again Sports, Ann Arbor
Why we are taking the FUN out of life »