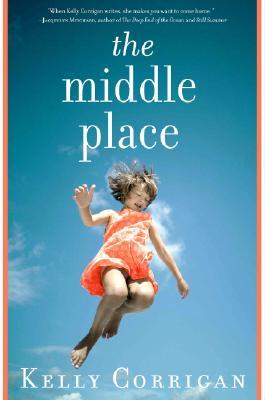 The Middle Place is a quick, witty book about motherhood with a priceless perspective. I loved watching Corrigan relate with her children and husband, but mostly with her father as she battles her own illness and garners strength from herself and those around her. I enjoyed each second I spent reading her memoir.I giggled, smiled, cried, shared, and looked forward to turning each page. One warning, she is battling cancer, so sometimes her language is a bit colorful and she can be very open and blunt.

From the book came a quote, as Corrigan describes her father, that changed my life, literally, as it partially defined the person I would love to be someday. It is not who I am naturally, so it is a constant evolution, but boy, what if someone ever described me as she describes her dad? 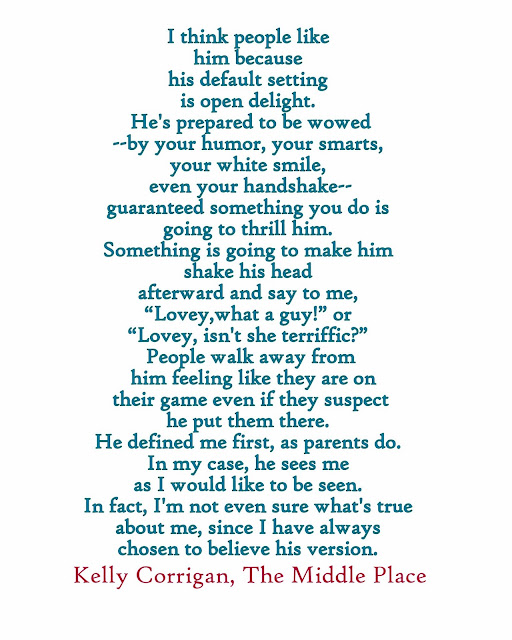 Goodreads.com summary **SPOILER ALERT**Corrigan opens her memoir with these words: “The thing you need to know about me is that I am George Corrigan’s daughter, his only daughter.”She continues with an unabashed tribute to the first man in her life.George Corrigan emerges as an outsized figure of immense good cheer and spirited disposition. A self-assured adman and former all-American lacrosse player (now part-time coach), he shines brightly, and his daughter appears content to live in his reflected glory.Kelly considers herself lucky for this great touchstone in her life, and her dad’s can-do spirit becomes her greatest asset when she’s diagnosed with breast cancer as a young mother. It is her dad’s pluck and resolve that will see her through the oncoming battles — including the realization that her “cure” will mean the end of her ability to bear children and her dream of having a large family of her own.Though Kelly writes of her husband and daughters, her mother and her brothers, it is her father’s love that sustains her. And so, readers fear for her when she reveals that George has been diagnosed with cancer, too. It is at this nadir, facing not only her own mortality but her father’s as well, that Kelly finally begins to emerge as a survivor — a wife, a mother, and more herself. Yet, she will always be her father’s daughter.